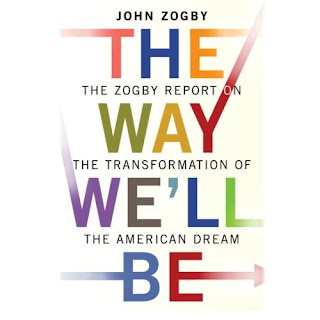 When a product is no longer selling, businesses will often "re-brand". Take the same thing and call it something different. Does the same thing happen with ideas? Say goodbye to Net Gens and hello to.....First Globals.

In a newly-released book (The Way We'll Be: The Zogby Report on the Transformation of the American Dream) John Zogby highlights the emerging influence of the First Globals, whom his book calls "the most outward-looking and accepting generation in American history." First Globals, he says, are more socially tolerant and internationally aware.

According to Zogby the First Globals are causing a "fundamental reorientation of the American character away from wanton consumption and toward a new global citizenry in an age of limited resources."

And of course, there are implications for higher education. According to an interview with the Chronicle of Higher Education, "these days...students are much more likely to have experienced other cultures firsthand, either as tourists or because they have immigrated from someplace else. Whether college for them is a traditional complex of buildings or an interactive online message board, said Mr. Zogby, there is a different student on campus."

Now, I haven't read this book but I'm always skeptical when I hear sweeping claims being made about paradigm shifts at "lightning speed", "transcendent change" and when educational innovation is compared to microbrewed beer, automobile sharing, and DVD rentals by mail.

Zogby's claims are based on data from polls conducted in 2007 of several thousand Americans.

Read the Chronicle of Higher Education review of the book.

The Way We'll Be: The Zogby Report on the Transformation of the American Dream

The purpose of this blog is to provide a balanced exploration of research and commentary on the impact of digital technologies on higher education. This blog is part of the research project, Digital Learners in Higher Education: Implications for Teaching, Learning & Technology which aims to develop a deeper understanding of the role of digital technology in higher education, how learners use technology for academic, social and other purposes and how those uses are related.